Its office is in the Solukhumbu district (where the highest peak of the world is situated) at Dudhakunda Municipality 5, salleri. Broadcasting has been arranged from the Relay station built in the hill of Salleri-8 Selgudi. It’s tower has been built at the height of 3000 metre from the sea level with the capacity of 1000 watt. It is being broadcasted in 37 districts along with 16 district of Eastern Region and Central Region and in the border with neighbouring country India. 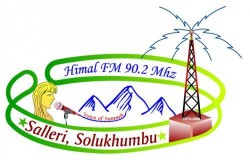 Himal FM 90.2 MHz is in online broadcasting right after one month of its establishment. It can be heard worlwide loging into http://himalfm.org/.

Nepali living in different parts of the world and people interested and concerned about Nepal can listen to Himal FM and they can also express their feebacks. Himal FM, which right after its establishment has been serving with News, Information, education and healthy entertainment has made people away from Nepal to feel at home by providing local, national and international news.

It has given the opportunity to send messages to everyone from abroad.