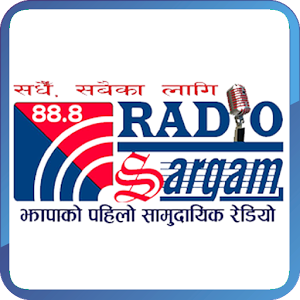 It started its broadcast on 15 Ashoj 2067 by Tamor Nepal Youth Group. Radio Sargam is located in Mechinagar ward no. 1 Dhulabari. Radio Sargam has excellent covearge in Eastern region of Nepal and some parts of India like Sikkim and Darjeeling. Daily regular 4 and weekly 16 programs are aired with a varieties of local languages with local flavour.
Programs are being aired for  17 hours from 5am to 10 pm via 88.8 MHz.
Radio Sargam, the first community radio of Jhapa, is established by a multidisciplinary team of conscious, energetic youths and experienced professionals. Through dissemination of information to different segments of the society, the Radio aims at gearing social change by achieving the underneath goals:
To raise awareness on various social evils/practices traditionally prevalent in the back-warded and marginalized community
To sensitize community people on the impact to be caused by natural disasters and the measures to be taken prior, during and after the occurrence of crises
To uplift awareness level of the community people on various public health issues including maternal health issues, epidemics such as HIV/AIDS, flues, tuberculosis etc.
To infuse and strengthen self-confidence and positive attitude among the nearly frustrated youths of the community
To identify and help exploit the resources (human, natural etc) existing but undermined in the community
To inculcate a sense of attachment and brotherhood among diverse social and ethnic groups/castes and help strengthen the social fabric.

You may also love ❤️